News in Focus: 40 Years of Teletext in Germany

A well-known information medium is celebrating its fortieth anniversary in Germany this year. It is not the Internet, which became publicly accessible world-wide on August 6, 19911 and therefore “only” turns 30 next year. It is also not good old SMS, which was first sent as a Christmas message about a year and a half later, on December 3, 19922. Instead, it is Teletext, which, even today, still delivers crisp and focused information in the German-speaking area.

The anniversary is an impulse to look back on the origins and evolution of Teletext, in which TARA Systems has played a significant role since 1990. The original method of presentation and information transfer of Teletext technology with its limitation to the essential content is still impressively up-to-date. The overview and news pages, regardless of the language, are consistently simple, universal and understandable. 12 million people in Germany still use Teletext every week3.

Teletext continues to be supported in modern TV receivers and set-top boxes and combines lively technology with state-of-the-art reception. Lean, fast, well-known and familiar to the masses the idea of Teletext lives on even in modern, web-based media such as HbbTV.

The Beginning of the Development

It all began in 1971 when Munich-based Institut für Rundfunktechnik (IRT) investigated various methods of providing viewers with information in addition to video and audio signals. The UK first transmitted Teletext in 1974 and shortly after that, Ceefax went on air. One year later, IRT carried out tests in Germany in cooperation with the British Broadcasting Corporation (BBC) and the UK’s Independent Broadcasting Authority (IBA). The first transmission here was titled Teletext in Bavaria.

Teletext – in Germany also referred to as Videotext – was first demonstrated by ARD and ZDF during the 1977 International Radio and Broadcasting Exhibition (IFA Berlin). At that time it comprised 400 pages. In 1980, the new information service on the television screen was officially launched in Germany and Austria.

When consumer electronic companies still used cathode ray tubes inside analogue television sets, the picture was built up line by line from top to bottom by an electron beam. The time it took the beam to jump back from the last line to the first line was called the vertical blanking interval. During this time no image is displayed, and the incoming signal could be used to transmit additional data.

Each page of Teletext consists of 24 lines each with 40 characters. There is a maximum of 800 individually accessible primary pages, numbering from 100 to 899. Each of these primary pages can contain up to 99 sub-pages. The pages are transmitted in a carousel, one after the other. So you must wait until the selected page is picked up to be displayed. However, with a connected memory, it is possible to save the pages and thus recall them more quickly.

The navigation in Teletext is straightforward. Simply press the Teletext key and enter three numbers for the desired page – and that’s it. A simple concept which has not changed over the years.

The vertical blanking interval was not only used for Teletext. In the coming years, many applications were developed in which data was transmitted parallel to Teletext. One example was a method used for the automatic control of video recorders using VCR4, introduced in 1985. With further development, including the introduction of error correction, it also became possible to transmit audio and video files.

From Teletext Level 1 to Level 2.5

Various levels were defined for Teletext. Level 1, which formed the basis, contained 8 primary colours, a font with block-mosaic characters which could support simple block graphics and a page format comprised of 24 lines each with 40 characters. Teletext Level 1.5 extended Level 1 by introducing additional languages and navigation with colour keys.

At the beginning of the 1990s, the need for enhanced graphical capability grew and prompted the development of Teletext Level 2.5, also called HiText. The font was then extended with the introduction of 24 freely programmable characters and paved the way for the creation of simple graphics and an extensive colour palette. A side panel was introduced for the newly introduced 16:9 TVs which supported up to 64 characters per line. 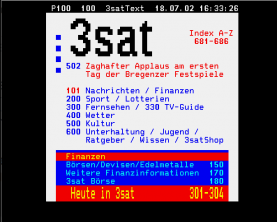 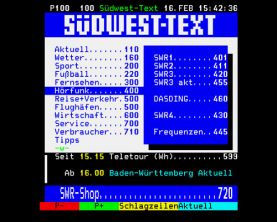 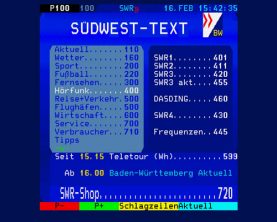 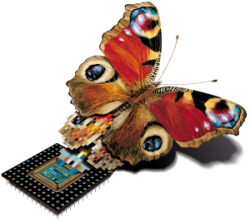 TARA Systems appeared on the scene at the time Teletext Level 2.5 was developed. Among the European and German semiconductor manufacturers, Siemens and Philips soon emerged with their own development departments focused on this technology. TARA Systems received an order from Siemens in 1990 and entered Teletext development as an independent software manufacturer. The Megatext chip created at this time by Siemens is part of our company logo, reflecting our origin. TARA Systems acted as an external software development company for various large TV manufacturers.

Teletext Level 1.5 decoders used special components in which Teletext was hard-wired. In comparison, the new Teletext Level 2.5 was much more complex and demanded it to be based on software rather than hardware. For this purpose, Siemens created the Megatext chip, a component with its own 24-bit RISC processor, making it possible to develop a software based Teletext Level 2.5 decoder. 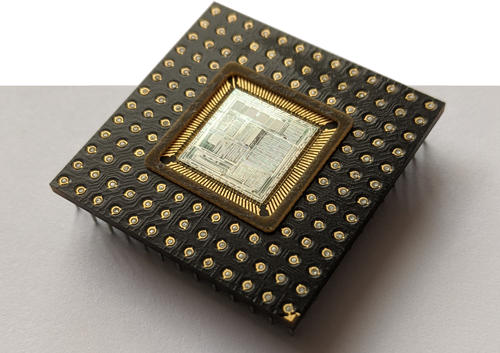 TARA Systems created the complete development environment, with emulator, assembler and a simple operating system and also implemented a Teletext Level 2.5 decoder in software for the Megatext platform. At this time, the creation of Teletext Level 2.5 pages for demonstration and test was a laborious manual process. Many fancy examples were also available from companies providing Teletext generation equipment.

ARD and ZDF presented Teletext Level 2.5 at the IFA Berlin in 1995. Well-known television manufacturers such as Grundig, Loewe, Metz, Sony, Philips and B&O presented devices compatible with this new service.

Although some broadcasters based their service on the new Teletext Level 2.5, the service was not widely adopted by broadcasters. Nevertheless, Level 2.5 became a standard for receivers, especially for higher-end sets. At that time, only Siemens and Philips could meet the technical requirements. However, since Philips only produced for its own devices and TARA Systems had established itself as a trusted independent software manufacturer, we were able to establish business relationships with many other device manufacturers. Thomson, Loewe, Grundig, Metz, Panasonic, JVC, LG, Samsung, B&O and Sony were and are among our customers.

Soon after, the TARA Systems team developed the software for a platform-independent 32-bit Teletext decoder for Panasonic, which was already enabled for digital reception. Meanwhile, technical progress was also offering higher memory capacity. Larger memories now enabled sub-pages to be stored in addition to primary pages. This demanded a new page management process to enable fast and efficient access to all pages (Subpage Collect Mode). 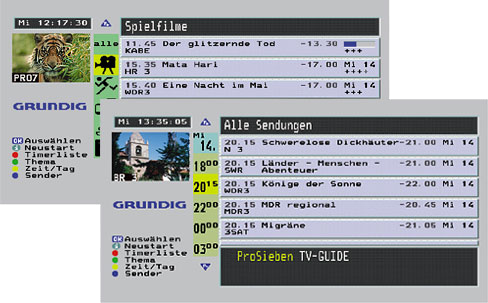 Since inception, Teletext had been used to provide information on current and future programmes. In 1997, nexTView5 extended this by offering a separate service for the transmission and presentation of an electronic program guide (EPG). The nexTView data was transmitted simultaneously with Teletext in the blanking interval.

NexTView was based on existing Teletext technology, especially in the way it displayed text thereby ensuring a way to reuse the existing Teletext decoders. In nexTView, single parts or whole pages of the Teletext were referenced.

TARA Systems created a first  nexTView reference decoder for a consortium of European television manufacturers, which also ran on the Megatext chip and continued to be an active contributor to the standardisation of nexTView.

Shortly before the new millennium, Germany introduced digital television based on DVB in 1997. At that time, in addition to analogue TV channels the new digital channels were broadcast principally on satellite by SES. With digital television, video and audio content is transmitted in a digital form using PES (Packetized Elementary Stream) packets in a transport stream. The Teletext packets used originally in the analogue blanking interval can also be transmitted using special PES packets.

Teletext has been developed to take advantage of this increased quality of video signals in digital television. Every character in Teletext had been defined previously with a resolution of just 12 pixels horizontally and 10 pixels vertically. With characters of this low resolution, one could now clearly perceive the individual pixels on the screen. TARA Systems developed an individual font to help optimise the appearance of Teletext in this new digital environment: the Teletext TrueType font.

This in-house development became necessary because a whole range of unique characters are defined for Teletext which were not supported by any available character set, nor defined in Unicode. As mentioned earlier, block-mosaic characters had been used in Teletext Level 1.5 to present simple graphics. A whole range of new “exotic” characters were added for Level 2.5 to further improve the possibilities for character-based graphics. 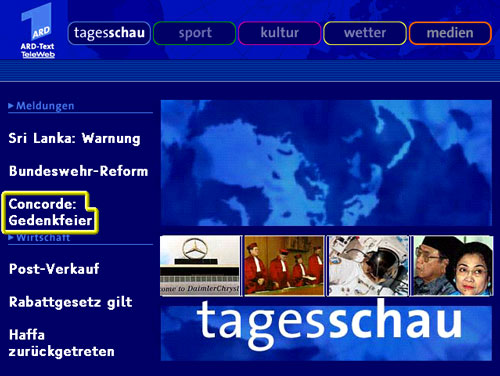 At the beginning of the 21st century, the first efforts were made to create a successor to Teletext with TeleWeb. The first TeleWeb-enabled TV sets, using HTML 3.2, were presented at the IFA Berlin in 2001 as one of the 10 most important innovations of the year. This was one of the first attempts to implement HTML-based information services on TV sets. Compared to the original Teletext, real images based on JPEG and GIF with animations and ticker tape could now be delivered.

In the beginning, HTML pages were also transmitted in the vertical blanking interval together with classic Teletext information. TeleWeb content could be linked directly to Teletext pages. TARA Systems, in turn, had created the first TeleWeb reference decoder for a consortium of European television manufacturers and worked actively on standardisation. However, the upcoming Multimedia Home Platform (MHP) soon replaced TeleWeb6.

Since 2010, Smart TVs connected to the Internet have emerged and built the basis for a further enhanced version of Teletext.The new Hybrid Broadcast Broadband TV (HbbTV) format has been on the market since 2010, supplementing Teletext with a contemporary model. Using HbbTV, content can be received via several transmission paths (DVB and Internet). The HbbTV format is based on many existing television standards, such as DVB, but also on Internet technologies, such as HTML. Digital television could now be linked with content from the Internet. While a programme is playing, the viewer can access HTML pages by pressing the red button on the remote control. The familiar Teletext button can now be used to open HbbTV Teletext as well as the original Teletext. Redesigned Teletext using HTML, offering higher resolution including pictures and even videos, ensure this information service continues to be compelling to this day.

Streaming Solutions in the Present

Today, more and more TV sets are connected to the Internet. Users can consume additional content from the broadcasters using Internet streaming technologies. New transmission protocols no longer allow Teletext to be transmitted with audio and video content. The intelligent solution for this involves the Teletext pages being accessed via a server maintained by the platform operator. Teletext pages are simultaneously received from all TV channels at a central point with all pages stored on the server. The viewer’s device accesses this server and picks up any page from the various TV channels in an instant.

Viewers benefit from this shift as they no longer have to wait for the reception of a page, as was the case with classic Teletext transmitted in a page carousel. This technique also ensures that Teletext pages can be displayed on mobile devices, including smartphones and tablets.

In these days where one technology replaces the next at an increasingly rapid pace, it is remarkable that a medium first introduced in Germany 40 years ago is still thriving. Teletext has survived this long period and evolved from its analogue origins into the digital age and is integrated with today’s Internet services. However, as our daily flood of images and advertising threatens to make us lose sight of the real content, it becomes clear that the strength and charm of Teletext lies in its precise simplicity and necessary restriction. Its concise nature, which allows focusing on the content without further distraction, is a characteristic that makes Teletext attractive even today. We at TARA Systems are grateful that we were able to participate in shaping a vital part of the history of Teletext in its various versions and transformations – and still play an active role in its development and spread.

This essay is authored and published by TARA Systems